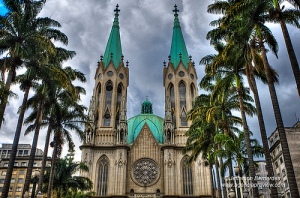 There’s a very traditional Sao Paulo City Tour and that includes Downtown Sao Paulo. A good map in hands is crucial and after doing a good web search I came across a very complete one. See the map here.

I think it’s very difficult to visit all sightseeings, so I suggest the following itinerary:

1. Catedral da Sé – it is also where the zero kilometer point of the city is located (#5 on the Map)

2. Pátio do Colégio – the origin of Sao Paulo (#40 on the Map)
There is a small coffee place there. You should try “Broa de Fubá”. A sweety bread made of corn flour

4. Mosteiro de São Bento – Monastery with Gregorian chants during some mass. Usuall, very early in the morning. You should check the time on their website (#1 on the Map)

5. Edifício Banespa – observatory deck during weekdays. A nice view from the top (#10 on the Map)

All the sightseeing above can be done by walking, starting, for example, from Catedral da Sé. From here I do prefer continue on walking and go to 25 de Março street, but it can be tiring for some people and subway can be an option. Or from Patio do Colégio, you can go to 25 de Março and then continue te tour to the other touristic points I suggested. I simply saved 25 de Março for later, because Mercado Municipal is near by and I’d rather have lunch there, after an interesting walk on 25 de Março. Walking from Viaduto do Chá (see map) you should take Boa Vista Street and then Ladeira Porto Geral to reach 25 de Marco. On the Boa Vista St, there is a nice coffee place – Café Girondino (Rua Boa Vista, 365). If you don’t want to eat at Mercadão, this place can be a good alternative.

9. 25 de Março Street – It is a street market center, the largest popular street market in Latin America. Very cheap merchandise. You should be careful with burglars (close to #28 on the Map)

If you’re a tireless person as I am, you can continue on your tour and go to Estação da Luz and end your day at Pinacoteca Museum. For that, you should go back to Ladeira Porto Geral and take the subway to Luz Station (estação da Luz).

11. Estacão da Luz e Julio Prestes – an active train station, built in the end of the XIX century. Nice old construction, well-preserved (#16 on the Map). There is a park in the area, Parque da Luz, open to public visit.

12. Pinacoteca do Estado – Museum. There is a museum coffee place where you relax before heading back home or the hotel (#41 on the Map)

There are more posts on “Visiting Sao Paulo” to come in the near future!